After training as a mechanic and working at Peppers in Leek, Frank Lawson decided it was time to start out on his own. In 1937 Frank and his wife May built and opened Crown Garage, named so due to the coronation of King George VI, right here in Leekbrook. Frank’s son Peter Lawson, joined the firm in 1949. 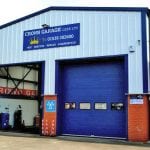 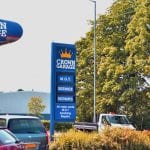 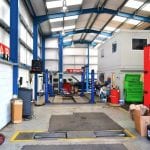 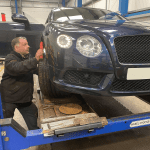 In the late 1950s, new MOT premises were built next to the original workshop and in the 1960s, Peter’s wife Dulcie came to work at Crown Garage. Frank died in 1985 and ownership passed to Peter and Dulcie. Frank’s grandson David, joined the company in 1980. David and his wife Caroline, took over the running of the garage in 2000 after Peter took retirement.

In 2014 the business had a new state of the art workshop and MOT premises built to cope with modern vehicles and take Crown Garage forward into the future.

David and Caroline’s son Jake is now involved in the company, making him the fourth generation in the family to work at Crown Garage.

We MOT (classes 4 and 7), repair and service all makes and models of cars from classic cars to the most modern models, and we’re fully qualified to work on electric and hybrid vehicles. Our customers come back to us year after year because they trust us to do a quality, reliable job and they know they’ll get excellent customer service, and all at competitive prices.

Some of our services at a glance:

To find out more about the services we offer, or to book an appointment please call us on 01538 382600 or contact us online.

Book your MOT online with Crown Garage, it's really simple...

Book your service online with Crown Garage, it's just a click away...

Get in contact with Crown Garage, we are happy to help...

Websites for the motor industry from